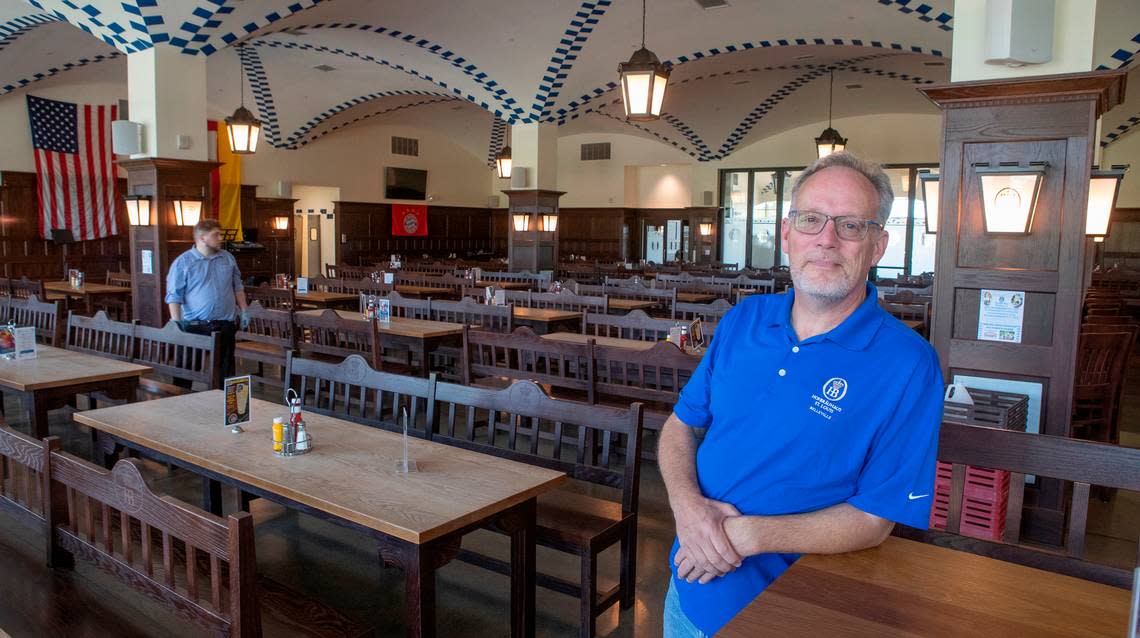 The original developers of the Belleville Hofbräuhaus had to forfeit over $5 million in real estate sales to their bankers following a lawsuit seeking a $21.7 million judgment against them.

While the court case remains active, the German restaurant located off Illinois 15 is continuing with operations, including an Oktoberfest celebration this weekend.

The Hofbräuhaus is under the watch of William Guy Crouch, a court-appointed receiver who has had “complete and exclusive control” over the restaurant’s business affairs since December 2019 after Royal Banks of Missouri filed a lawsuit in court in St. Louis County Circuit seeking a $21.7 million judgment against the original developers, the Keller family of Effingham.

Property owned by the Keller family company, the Keller Development Corp., including a Walmart Supercenter site in Effingham, was sold as part of the lawsuit and a judge cleared the use of an undisclosed amount of the sales for the operation of the Hofbräuhaus.

Here are details of the properties the Keller family has so far liquidated:

▪ Kamin Realty, a Delaware limited liability company, has agreed to purchase the 19.77-acre site of the Effingham Walmart Supercenter for $4.54 million, less a commission of $174,800 to be paid to the buyer’s broker for a final purchase price of $4.37 million, according to a court order issued by Judge John Borbonus on November 18. The sale resulted in the repayment of a loan that Keller Development Corp. contracted with the Clay County State Bank. Additionally, the order states that Royal Banks may make “certain sums available” to Crouch for expenses at the Hofbräuhaus.

▪ The town of Effingham has agreed to purchase vacant property off North Raney Street near the Walmart in Effingham for $775,495, according to an Oct. 21 Borbonus court order. Funds went to Crossroads Bank and Royal Banks of Missouri. The order also saw the Kellers receive $52,500 in a transaction for nearby land. As in the sale of the Walmart property, Borbonus ruled that Royal Bank was permitted to use an undisclosed portion of the sale proceeds for expenses at the Hofbräuhaus.

Effingham City Administrator Steve Miller said the city purchased the main site near Interstate 70-57 with the intention of reselling it and is in negotiations with a potential buyer.

While the documents regarding these two property sales were open to the public, Crouch’s interim reports on the Hofbräuhaus were sealed by the court.

The Hofbräuhaus opened in March 2018, about two years later than the Keller family originally announced its opening. Hotels, a conference center and other restaurants were part of the proposal but they were never built.

The City of Belleville spent $2.42 million to extend sewer lines to the development site. It also granted several types of tax incentives worth up to $32.36 million to Hofbräuhaus developers, but these incentives were based on future revenue generated at the site and were not paid out of pocket. ‘advance.

Since the opening of the Hofbräuhaus, the city has given no incentives to developers.

Crouch said his lawyers were working to get income from one of the incentives. The city has established a business district on the site which allows an additional 1% sales tax to be levied on the complex, to which developers can claim this revenue.

Chuck Keller, a former state official, and his family benefited from tax incentives before the opening of the Hofbräuhaus. Keller died in January 2019 on his 80th birthday.

A Kansas City man, David Thorman, had proposed building an 11-field soccer complex next to the Hofbräuhaus, but died before construction began.

Two other companies offered to build a convenience store on the site, but neither of those plans came to fruition.

The 26.25 acres where the hotels, conference center and restaurant were proposed remain for sale with Shiloh’s BarberMurphy listing the property. Mike Durbin, a broker associated with BarberMurphy, did not release the asking price for the site, but said it could be sold in smaller parcels if a potential buyer did not want the entire site.

Durbin noted that the vacant lot is located across Illinois 15 from the National Shrine of Our Lady of the Snows, it is close to downtown St. Louis and Interstate 255, it has all connections utilities needed to be “shovel ready” and there are 34,000 vehicles passing through the site every day.

Oktoberfest at the Hofbräuhaus

The COVID-19 pandemic began shortly after Crouch took over operations of the Hofbräuhaus and the court case involving Royal Banks of Missouri remains pending.

“We shut down the whole world,” he said of the pandemic that caused covered and seated restaurants to close in Illinois in March 2020.

“We want people to see and taste the food and have a beer and have fun,” he said.

“We employ people, we have great food, we have great beer, great entertainment, so we really want people in the metro east to come out and support this business.”

The Hofbräuhaus Oktoberfest started on Friday and continues on Sunday with the band Die Spitzbaum scheduled to perform.

The Hofbräu beer served at the festival is imported from Munich, Germany, as the local brewing operation has been discontinued. Crouch said he hopes to resume making beer on site because the equipment installed in the restaurant is the “Rolls-Royce” of brewing equipment.

Andrew Jeffery, the executive chef who has been at the Hofbräuhaus since the restaurant opened in 2018, said the kitchen is a “top-notch” place to produce dishes for the menu, which has primarily a German flair but also features American dishes.

The restaurant recently launched a new menu for Sunday brunch and for lunch, the menu has 10 dishes for $10 with the promise of being ready in 10 minutes.

You can call the Hofbräuhaus at 618-800-2337. The website has been updated to hbbelleville.com and the restaurant’s Facebook page has over 20,000 followers.