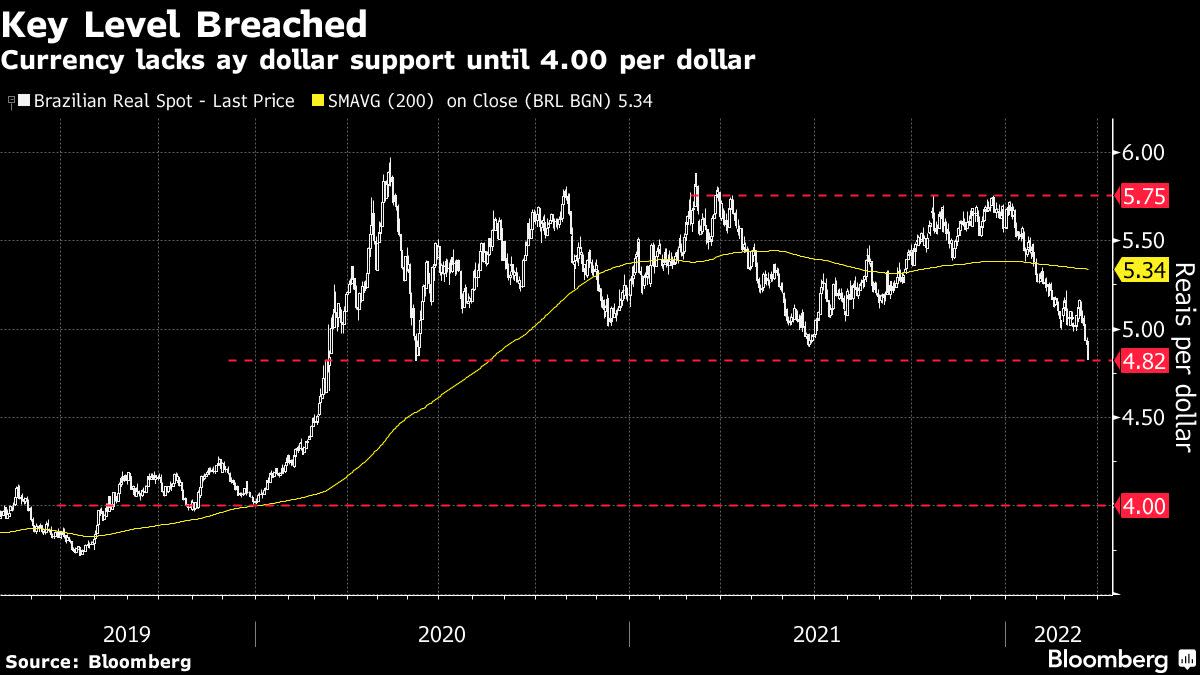 On Thursday, the real strengthened to 4.7663 to the dollar, the highest since March 2020, extending its year-to-date advance to more than 16%, the largest among the 31 major currencies. The currency’s implied volatility, meanwhile, is at levels not seen since early February. As the real rallied, the return of the benchmark local stock index in dollars jumped to more than 30%, the best of any national stock index tracked by Bloomberg.

Brazilian markets are attracting emerging market investors despite heightened global volatility, with local assets benefiting from the massive rise in commodity prices and fixed-income securities offering juicy returns after aggressive monetary policy tightening. Global investors were net buyers of Brazilian stocks in the local market in 53 of 55 sessions through March 22, adding more than 83 billion reais ($17.3 billion) during that period.

“BRL continues to shine in the spotlight,” BBVA strategists led by Roberto Cobo wrote in a note Thursday. “There is still time for the carry trade to outperform as policymakers await more data before making drastic changes to the path of interest rates.”

The real gained momentum on Wednesday after breaking through 4.8942 per dollar, a level last seen in June 2021 that triggered stops on downside positions. The currency no longer has a significant technical barrier up to 4 to the dollar, an important psychological mark.

Foreign investors, who fueled the real’s rally in the first two months of the year, are resuming their bullish bets after staying on the sidelines for a few weeks due to the Russian-Ukrainian war. Non-residents reduced their long dollar positions through derivatives by $3.9 billion between March 14 and 23, while local stocks attracted $1.6 billion in the week ended on March 18, nearly four times the inflow of the previous week, according to data from local exchange B3.

“Ibovespa’s attractive valuations, extreme carry and positive terms-of-trade shock are firmly in place,” Alvaro Vivanco, head of emerging markets strategy at NatWest Markets, wrote in a note. He has been recommending his clients to bet on the real against the Mexican peso since the start of the war in Ukraine last month.

Credit Suisse said the real has room for further improvement as it remains undervalued in real terms, with the recent gain only partially reversing the steep depreciation of recent years. Bank analysts said in a report that Brazil’s real interest rate differential with the United States is near its all-time high, supporting greater currency strength.

Brazil’s central bank has carried out one of the most aggressive tightening cycles in the world, raising rates by 975 basis points over the past year to combat rising inflation. With officials now signaling a desire to end the cycle after a final one-point rise in May, the real’s carry is likely to remain elevated for some time before officials find room to maneuver as the global recovery raw materials keeps prices under pressure.