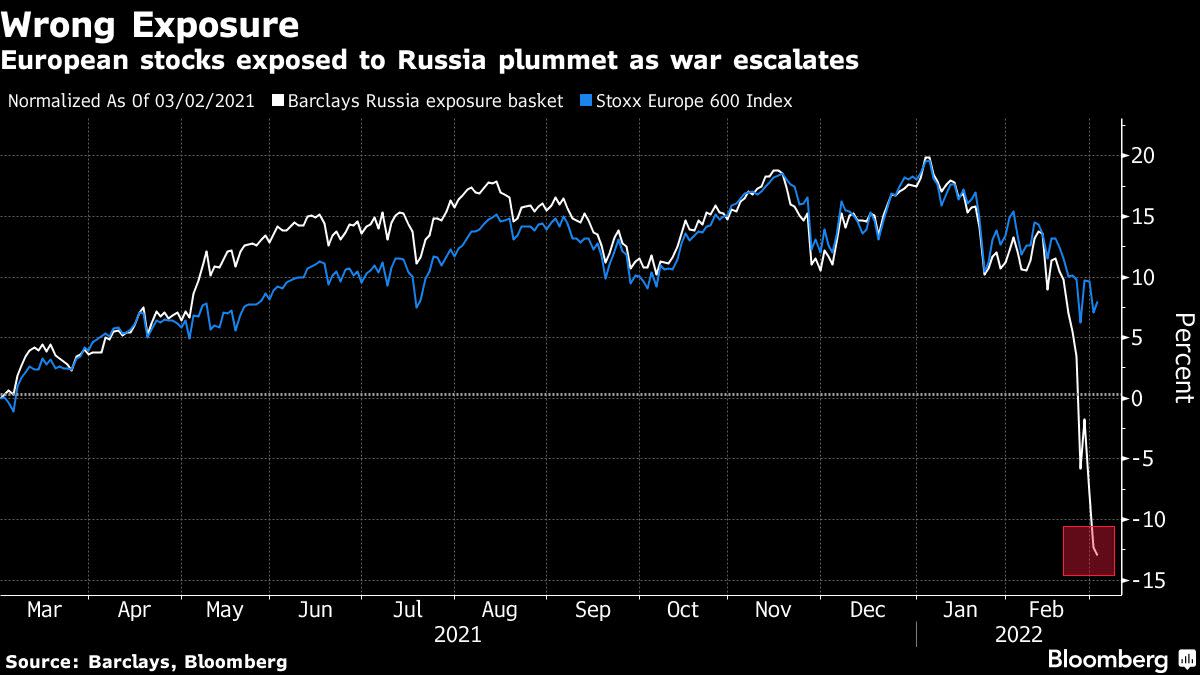 (Bloomberg) — European stocks with trade exposure to Russia have lost more than $100 billion in market value since war risks rose. Yet with the impact of the sanctions on Moscow remaining uncertain, few are prepared to roll them back just yet.

“Nobody knows where it ends and we are in an environment of maximum uncertainty which requires an overhaul for most investors,” said Peter Garnry, head of equity strategy at Saxo Bank AS.

From gold miner Polymetal International Plc to tire maker Nokian Renkaat Oyj and Austria’s Raiffeisen Bank International, the liquidation of European companies exposed to Russia has been severe. Some stocks have lost three-quarters of their value since February 18, when concerns about a Russian invasion of Ukraine began to take hold. Popular names such as Renault SA and Wizz Air Holdings Plc also fell by more than 20%.

During this period, a total of $100 billion was erased from the value of the 22 Stoxx Europe 600 companies that make more than 5% of their sales in Russia. The London Stock Exchange announced on Thursday that it had suspended trading in dozens of certificates of deposit for Russian companies “in connection with events in Ukraine, in light of market conditions and in order to maintain orderly markets”.

The impact on European stocks of the war in Ukraine does not end there. Oil giants BP Plc and Shell Plc have said they will move away from Russia, reversing three decades of investment after the collapse of the Soviet Union in 1991. Daimler Truck Holding AG, one of the main builders of commercial vehicles, said it would halt business operations there until further notice and may review ties with local joint venture partner Kamaz PJSC.

The European sector that has been most affected by the sale is that of banks. The Stoxx 600 Banks Index has fallen nearly 20% from a high on Feb. 10, flirting with bear market territory. In this framework, Raiffeisen was by far the worst performer, losing around half of its market value.

The Austrian lender, which had nearly 14 billion euros ($16 billion) in loans outstanding in Russia and Ukraine at the end of last year, said on Tuesday it had halted its dividend for 2021 , but that he had no intention of retiring from his activity in the region.

Edmund Shing, chief investment officer at BNP Paribas Wealth Management, says banks are one of many sectors “where we are overpricing risk”.

Still, there are no signs of investors sinking yet. Polymetal, which is one of the cheapest stocks in Europe with a multiple of just 1.5 times forward earnings, saw only a slight rebound after plunging to a record low.

According to Pascal Blanque, group chief investment officer at Amundi Asset Management, investors looking for “entry points” in many market segments should exercise caution because “revaluation and reorganization still have to go further”. .

“We are in the midst of a regime change characterized by unprecedented inflationary forces not seen in the past five decades,” Blanque wrote, a situation that is exacerbated by soaring commodity prices.

Is the worst now integrated? It’s “impossible to say,” according to BNP’s Shing, especially given the indirect impact of the conflict on economic growth.