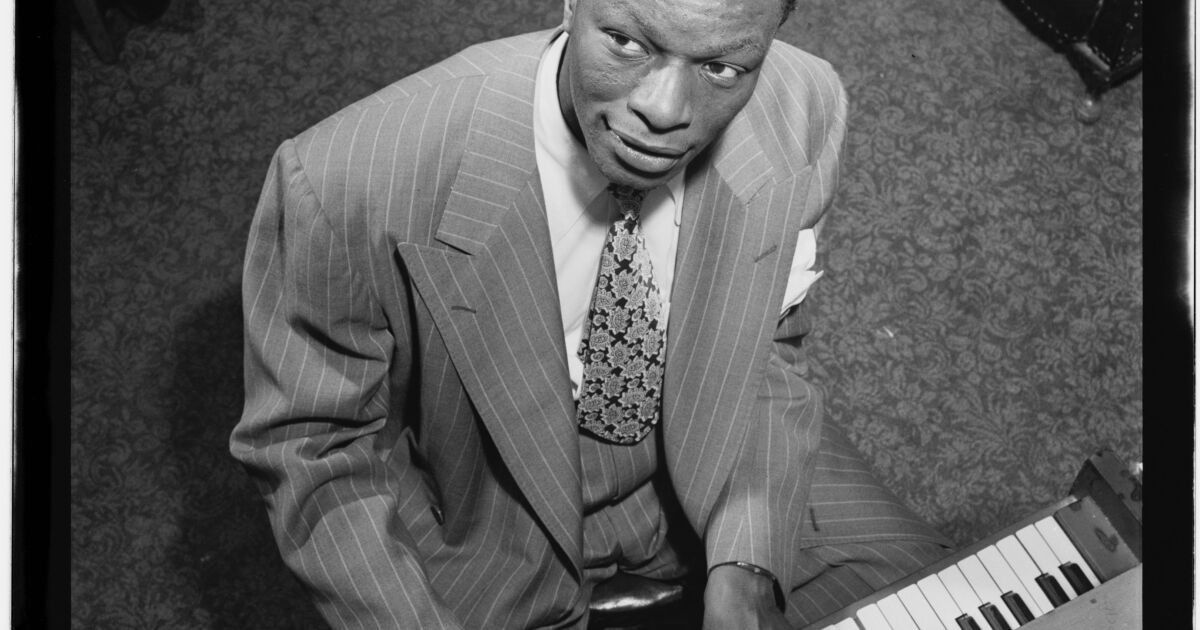 Twin sisters Casey and Timolin Cole were born into an unusual life of luxury in Hancock Park to a father nicknamed “King” whose success was so great that the historic Capitol Records building nearby in Hollywood was nicknamed ” The House That Nat Built”.

Guardians of the legacy and estate of legendary singer-bandleader-pianist Nat “King” Cole through their King Cole Productions, they have helped maintain and advance their father’s unique American story for decades. . It’s the one that began with his youth as a precocious teenage jazz pianist from Chicago and ended, in 1965, with his death from lung cancer at age 45, an icon whose crossover success and remarkable musicality changed 20th century American culture.

On Friday, Iconic Artists Group, the legacy management company owned by music executive Irving Azoff, announced that it has entered into a long-term agreement with Cole’s daughters to administer, protect and further develop the music, style and performance. trademark of Nat “King” Cole.

“What is this song, ‘For everything there is a season’? We thought the time was right,” Timolin Cole says over the phone from South Florida, where she and her sister live.

The deal encompasses a wide range of rights, including Cole’s recorded music, publishing, TV show, name and likeness. It comes at a time when artists such as Bob Dylan, Neil Diamond, Leonard Cohen and Bruce Springsteen have sold their catalogs and various rights for hundreds of millions of dollars. The terms of the contract are not disclosed.

In a statement to The Times, Azoff said, “Nat King Cole is an American icon in every sense of the word. His contribution to music, to style, to dignity, is both unique and timeless. We are honored to have the opportunity to preserve his legacy in the future.

Iconic will build on a foundation that the twins, their late siblings Natalie Cole, Nat Kelly Cole and Carole Cole and others have maintained since the patriarch’s death. Cole had by then sold millions of records for the fledgling Capitol Records and had become the first black artist to host his own network television show. In many American homes, the holiday season for many decades was not complete without Cole’s version of “Christmas Song” and his album “The Magic of Christmas.”

Possessing a velvet baritone, perfect pitch and brilliant piano skills, Cole is known for his recordings of songs such as “Unforgettable”, “Mona Lisa” and “Rambling Rose”. He sold his first song, “Straighten Up and Fly Right,” in 1937 for $50, according to the Songwriters Hall of Fame, but throughout his career he had more success as a performer.

Success, however, is an understatement. A friend of Presidents John F. Kennedy and Lyndon B. Johnson, Cole recorded 86 singles and 17 top 40 albums between 1943 and 1964, according to the Rock and Roll Hall of Fame, into which Cole was inducted in 2000. Remarkably versatile , Cole easily connected genres including jazz ballad, piano instrumental jazz, Latin-language songs, and mainstream pop. After signing with Capitol in the mid-1940s, Cole recorded hundreds of singles, the sales of which enabled the label, then located in a shared space at Sunset and Vine, to hire architect Louis Naidorf to design the building. iconic standalone down the block.

In his heyday, Cole was one of America’s most sought-after performers, collaborating with acclaimed arrangers such as Nelson Riddle, Gordon Jenkins and Billy May and competing on the pop charts alongside Frank Sinatra, Perry Como, Brenda Lee and others.

At Cole’s funeral, honorary pallbearers included Robert F. Kennedy, Count Basie, Sinatra, and California Governor Pat Brown. By then, the American public had been following Cole’s cancer diagnosis for months. The Times reported at the time that “half a million intimate friends and fans [had] sent messages of sympathy to Cole after he entered the hospital.

“We look for artists who have had a cultural impact, and Nat ‘King’ Cole certainly has,” says Jimmy Edwards, president of Iconic Artists Group. “Everyone knows a Nat ‘King’ Cole song.” Cole is the first non-living addition to Iconic’s roster, which includes Linda Ronstadt, David Crosby and the Beach Boys.

“Analysis of a person’s career doesn’t stop when they die,” says Grammy-winning jazz singer Gregory Porter, who released the 2017 tribute album “Nat King Cole & Me.” . “You apply the importance of their music to any moment we find ourselves in, and in that respect, Nat’s music is timeless.”

As with any black artist of the era, Cole’s story involves a career spent enduring racism. In 1948, he and his second wife Maria Hawkins bought a house from a friend in Hancock Park when she was in a whites-only neighborhood.

“It’s not an act of defiance,” Cole told The Times in August 1948 in a story with the deceptively benign headline, “Hancock Home Purchase Stirs Quandary.” The article described the sale as having been made “through a ‘dummy’ Caucasian buyer”.

“My bride and I love this house. I can afford it. And we would like to make it our home,” he told The Times. Adding that he had “always been a good citizen,” Cole concluded with an invitation, “I would like to meet all my new neighbors face to face and explain these things to them.”

Although rejected at first and threatened by Ku Klux Klan members who burned a cross on the Coles’ lawn, the family remained in the house until his death.

“Any successful person tries to insulate themselves from the trials and tribulations of life once they reach a certain level,” Porter says. “But it was an impossibility for him with the racial difficulty in our country – even buying him a house and being attacked on stage.”

Multi-platinum singer Johnny Mathis used to visit Cole at the Hancock Park home he shared with his wife and five children, and was keenly aware of threats and hatred.

“We talked about it later in life after we became friends,” says Mathis, now 86. “I was so proud of him because no one I’ve ever met in the business was as polite, loving and gracious as Nat. That anyone refusing him to live in the neighborhood, of course, was ridiculous.

Despite hatred and resistance, Cole soared in the 1950s releasing hit records both alone and with his Nat “King” Cole Trio while earning millions for himself and Capitol. In the decades since his death, Cole’s voice and spirit have continued to permeate the culture. His recordings have appeared in films such as ‘Raging Bull’, ‘Groundhog Day’ and ‘In the Mood for Love’ and television series such as ‘Ted Lasso’, ‘Breaking Bad’ and ‘The Sopranos’.

Mathis says that despite Cole’s success as a singer and recording artist, his talent was multifaceted, something Mathis learned at an early age. Growing up in San Francisco, he and his music-loving father often went to clubs to see Cole perform, an experience that continued as Mathis began his own artistic journey. “I was always in these big cities. Wherever he was, I was going to hear him and watch him sing. Not only did he have a beautiful, loving voice, but most people don’t realize he was a fabulous, fabulous musician.

Porter says Cole used those gifts to break down barriers. “Nat’s approach was, ‘Let me into the house. Let them see. He was trying to tear down the walls with his genius – a black man in hundreds of thousands of people’s living rooms singing songs of love and compassion while impeccably dressed.

Porter adds, “He had a profound effect on how people viewed a black man at the time.”

Cole’s experiences with racism have been widely reported, but other periods of his life are less appreciated, says Iconic’s Edwards, a former Warner Music Group and Frank Sinatra Enterprises executive. This is especially true of Cole’s genius at the head of his jazz trio. As such, these stories are ripe for exploration, whether through documentaries, scripted television series, or biopics. “Stories are always the most important thing,” he says.

He cites as an example Cole’s “days in Chicago where he faced [pianist] Earl Hines at the age of 16 and he was the talk of the town. He was outside clubs listening to Louis Armstrong. Edwards calls the period of Cole’s life as having “a whole cool Chicago element that I don’t think has been explored.” It’s an incredible story that involves gangsters and the greatest jazz musicians.

In addition to the Capitol Tower, Cole’s voice left its mark on the entertainment industry in another groundbreaking way when his daughter Natalie recorded a Grammy-winning duet with her father – a quarter century later. his death. “Unforgettable” had already been a hit decades before when, using multitrack technology, Nat joined Natalie in 1991 for a posthumous session. The album that followed, “Unforgettable…With Love”, sold over 7 million copies. The album and its songs won six Grammy trophies, including Record of the Year, Song of the Year, and Album of the Year. Considered a novelty at the time, these collaborations from beyond the grave now appear regularly on the pop charts. (Natalie Cole died in 2015.)

Cole has no plans yet to duet with Adele or feature in any new Metaverse projects, but Edwards says nothing is on the table, including a Nat “King” Cole clothing line. “He was such an amazing style icon – so stylish yet cool and relaxed.”

He adds, “What we like to do is get in there with the archive and give the full picture, tell the whole story. Nat gave us the opportunity to do so.

Top 4 real estate stocks to add to your watchlist