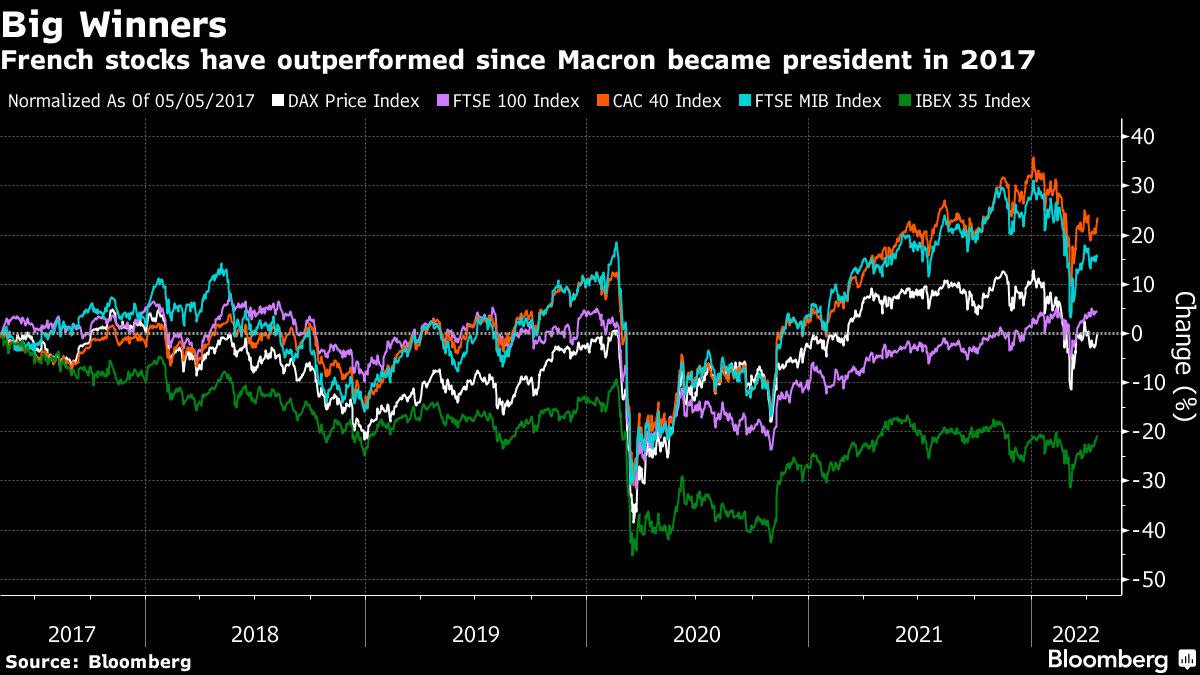 Emmanuel Macron heading for victory in the French presidential election should come as a relief to investors who fear a victory for Marine Le Pen could upend European markets.

The euro, French bonds and shares of domestic banks are among the assets that stand to benefit from Macron’s likely victory for a second term, fund managers say. The risk of a victory for far-right nationalist and eurosceptic Le Pen had investors on edge, with some predicting that European assets could suffer a selloff comparable to the euro crisis or Brexit.

With the count still in progress, projections from France’s top five pollsters put Macron on track to win around 58% of the vote in Sunday’s second round, compared to Le Pen’s 42%. The nationalist leader admitted defeat in a speech to her supporters in Paris.

“In the short term, the main logical beneficiary of this election could be the euro,” said Frédéric Leroux, member of the strategic investment committee of Carmignac Gestion. The currency rose 0.6% against the dollar at the start of trading in Sydney, before narrowing its lead to around 0.1%.

Shares of French banks like BNP Paribas SA and Société Générale SA, which have benefited from closer integration into the EU, should react positively to Macron’s re-election. The 44-year-old president pledged to continue efforts to make France the cornerstone of a stronger and more integrated EU.

Shares of toll motorway operators Vinci SA and Eiffage SA should also benefit as Le Pen had pledged to nationalize the country’s motorways. Investors also say Macron’s victory is positive for Electricité de France SA and Engie SA, as well as other stocks heavily dependent on the French market, such as construction company Bouygues SA.

French stocks and bonds had already been supported by polls showing a widening gap between the two contenders since the first round. Markets took comfort when politicians left and right backed Macron and Le Pen failed to deliver a heavy blow in Wednesday’s debate.

Macron’s re-election isn’t a huge surprise for markets, but it should still come as a relief, said Emmanuel Cau, head of European equity strategy at Barclays. He sees room for a “modest relief rally”, with the euro, France’s benchmark CAC 40 and French bank stocks benefiting the most.

While Le Pen had dropped calls as recently as 2017 to ditch the euro, she still argued for a referendum on the constitution to make French law superior to EU rules. She wanted to restore permanent border controls in the Schengen zone, which would have contradicted the law in the bloc.

“Macron’s victory removes a big risk at the European Union level”, a positive given the range of other challenges markets are currently facing, including China’s Covid-19 lockdowns, geopolitical risk and rising inflation, said Alexandre Baradez, chief market analyst at IG France. He said the CAC 40 index could climb around 1% on Monday barring bad news during Asian trading hours.

Stock Trader’s Guide to the French Elections: Winners and Losers

The challenge for Macron over the next five years will be to muster support for his plans to make the country more competitive by overhauling social policies such as pensions and improving the country’s economic fundamentals.

Investors are already looking ahead to the June legislative elections. Macron’s margin of victory was much narrower than last time, when he beat Le Pen by more than 30 points and rising support for his nationalist agenda reflected a country bitterly divided.

While “French political risk isn’t completely gone, that hurdle has at least been cleared,” said Michael Metcalfe, global head of macro strategy at State Street Global Markets. That leaves markets “focusing on the ECB and the implications of the ongoing conflict in Ukraine.”

(Updates with commentary throughout.)

Scaramucci Crypto Pivot Comes With An Eye On Assets Tripling

Focus on the latest equity investment trends in 2022