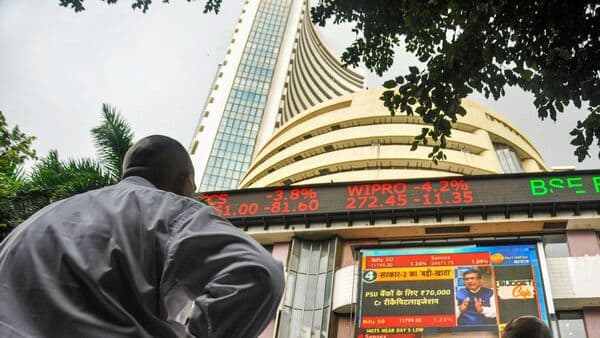 At home, Indian stock markets are trading on a flat note. Benchmarks opened on a positive note and extended gains to a third straight session ahead of the RBI MPC meeting outcome.

The RBI’s policy decision could be a key factor in the short term, as it could impact liquidity and interest rates. According to reports, a 25 basis point hike in the reverse repo rate is on the cards.

Currently, the BSE Sensex is down 104 points. Meanwhile, the NSE Nifty is trading down 28 points.

Power Grid and Tata Steel are among the top gainers today. Maruti Suzuki, on the other hand, is among the big losers today.

Sector indices are trading mixed, with shares in the telecommunications sector and FMCG sector under selling pressure.

Metal stocks and energy stocks, on the other hand, are trading green.

Shares of Gujarat Narmada and Nalco hit their highest level in 52 weeks today.

The rupee is trading at 74.85 against the US dollar.

Gold is trading in a tight range as investors waited for US inflation data that could offer new clues to the pace of monetary policy tightening by the Federal Reserve.

Crude oil prices are mixed today after bouncing off an unexpected drop in US crude inventories in the previous session, as investors await the outcome of US-Iranian nuclear talks that could quickly add crude supplies to oil markets. global markets.

In metals sector news, Steel Authority of India (SAIL) is among the hottest stocks today.

In the same quarter of the previous year, SAIL had recorded a net profit of ₹14.7 billion.

In a statement, the company said it achieved one of its best physical performances in the quarter as well as the nine months ended December 2021.

The company added that it achieved its best-ever third-quarter and nine-month production of hot metal, crude steel and salable steel.

However, the same is not reflected in the financial performance of the third quarter of FY22 due to various factors beyond the company’s control, which mainly include an unprecedented increase in the prices of imported coking coal and indigenous.

The company also mentioned that performance in the coming quarters will improve with the overall positive outlook for the economy and announcements in the Union budget for increased infrastructure spending.

Note that SAIL’s objective remains to reduce its borrowings, which translates to a reduction of approximately 15% compared to the September 2021 quarter. Its borrowings amounted to ₹191.3 billion in December 2021.

Speaking of SAIL, note that the stock has recently come under pressure after experts raised concerns about falling alloy prices and high raw material costs.

Brokerage firms now expect soaring coking coal costs to cause SAIL’s EBITDA to drop by more than half in the second half of the current fiscal year.

SAIL was among the best performing PSUs of 2021, growing more than 200% last year.

This strong performance is due to SAIL’s improved production and sales performance in fiscal 2021, and the company’s deleveraging.

It remains to be seen whether commodity stocks like SAIL will relive the dream run they had in 2021.

Moving on to news from the IPO space, according to an article by The Economic Times, Oyo Hotels & Homes plans to drastically reduce the size of its initial public offering (IPO) given the unfavorable secondary market conditions and falling stock prices. . of new-age tech startups.

Sources familiar with the matter said the IPO issue size is expected to be well under US$1 billion. In its draft IPO documents with the market regulator, Oyo had sought to raise US$1.2 billion.

The startup is also exploring the possibility of re-filing the Draft Red Herring Prospectus (DRHP) with the regulator if necessary.

In accordance with the standards, Oyo may have to refile its DRHP if it reduces the main offer or new issue of shares by more than 20% and the offer to sell (SFO) by more than 50%.

However, no such decision to refile the DRHP has been made as the company is still in the process of receiving the necessary final submissions and approvals from the company.

Oyo was aiming for a valuation in the range of US$9-12 billion, but could settle for around US$7 billion. It was last valued at US$9.6 billion when it raised Microsoft’s strategic investment in September last year.

Note that Oyo is not the only company to change its IPO plan. Mobikwik had postponed its IPO after getting the green light last year in October 2021, following the crash of new-age tech startups.

Of the big startups that have filed their DRHPs, Oyo, Delhivery and PharmEasy were due to launch their IPOs in 2022.

We will keep you informed of the latest developments in this space. Stay tuned.

To find out which IPOs are in the works, check out current and upcoming IPOs.

(This article is syndicated from equitymaster.com)