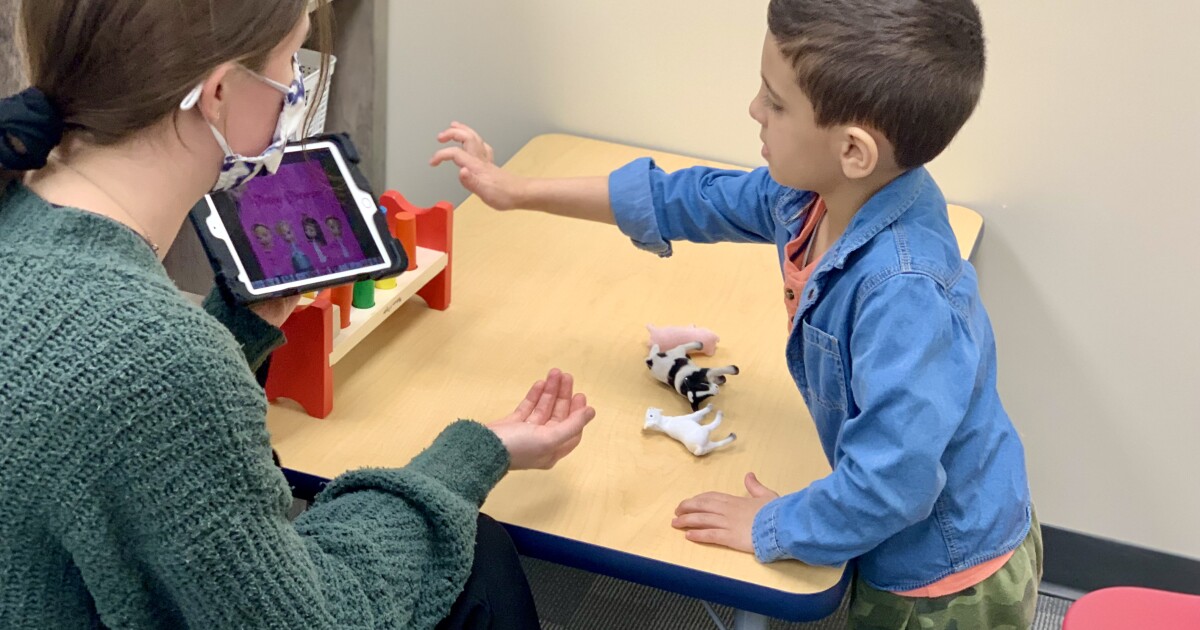 Autism strikes 1 in 44 children, according to the Centers for Disease Control estimates, including no less than 52,000 children in North Carolina. Autism is incurable, but research shows it can be treated if care is available. It is a crisis that has captured the attention of Wall Street.

You see this in a Chapel Hill clinic where a bubbly 4-year-old named Samuel is getting ready for school. He likes to sing, dance and run, but Samuel – not his real name – is not like most children. He is autistic. It is a neurological disorder that affects his ability to communicate and interact with others. And that meant he couldn’t handle preschool.

Samuel receives care at a Hopebridge autism therapy center. It is part of a growing chain of clinics, two of which will open in Charlotte in the next 18 months. Samuel is in therapy for 30 hours a week so he can develop the verbal and behavioral skills needed to return to school.

Other children here are not able to speak at all. Like a 3-year-old girl at the clinic, who learns to communicate by pressing buttons on a machine.

These kids don’t know it, but they are part of a change in health care. Private equity is fueling the growth of mental health treatment.

Private equity firms invest money for high net worth individuals, college endowments, and pension funds in hopes of earning more than they can in the stock market.

In 2015, private investments in behavioral health totaled $120 million. Five years later, that figure had risen to $1.2 billion, according to a industry analysis data from the private equity database, Pitchbook.

Why invest in autism? The demand for services is enormous. The number of people diagnosed with autism has more than tripled in the past 20 years, according to CDC estimates.

And after years of lobbying by parents and advocacy organizations, all 50 states are now requiring insurers to pay for autism care. In 2014, the government told state Medicaid programs they had to cover it too.

This combination of demand and guaranteed payment has fueled interest from private equity firms, said Kevin Taggert, who runs a firm that sets up the deals.

“Insurance companies started paying for the service,” Taggert said, “and then the demand for whatever reason, it seems like more and more kids are getting autism, unfortunately.”

“I get emails every week you know people who want to sponsor,” Strunk said. “It’s a little crazy sometimes.”

It’s been a long road for Strunk. An occupational therapist, she discovered applied behavior analysis 17 years ago when she was looking for a way to help her autistic patients. Today, ABA is considered one of many proven treatments for autism.

At first, Strunk had to grow his business with the support of local funders.

“The very first group of sponsors we had were local Indiana families who had just seen what we were doing, identified with the mission and wanted to participate.”

But when the private investment company Capital Baird acquired Hopebridge in 2017, it quickly doubled the number of clinics before selling out 18 months later. Private equity database, Pitchbook, says the deal was worth $255 million.

The buyer, Arsenal Capital Partners, added more than 60 clinics in just two years. And it will open 40 more centers this year, expanding to Alabama, Tennessee, Oklahoma and Arkansas, as well as North Carolina – all states where Medicaid reimbursement for therapists ABA is higher than the national average.

Hopebridge will not be the first, or even the largest, private equity-backed ABA provider in North Carolina. Several have clinics in Charlotte, with names like Alternative Behavior Strategies, Autism Learning Partners and BlueSprig — all backed by private equity firms.

All of this investment means care for thousands of children who would otherwise go without because there is a national shortage of therapists. In North Carolina, 15,000 people are on a waiting list for help through a special Medicaid program for people with severe disabilities, according to the Autism Society of North Carolina. Their average wait for help is 10 to 11 years, depending on the group.

Private investment has been essential, said Lori Unumb. She led the effort to get insurance companies to pay for ABA at the advocacy group, AutismSpeaks.

But private equity firms typically want a 300% return on investment when they sell, usually five to eight years later. One way to do that is to grow the business, Taggert says. And behavioral health is particularly appealing because it doesn’t take a lot of money to do it.

“If you’re Tesla and you want to build a new battery factory, it’s extremely expensive,” Taggert said. “You don’t have the same challenges in any of the behavioral spaces.”

They also increase revenue by reducing costs. They therefore combine the billing, legal and human resources departments of a number of firms to reduce unnecessary overhead. And they’re investing in software to make sure insurers get billed quickly.

But Unumb, who is also a mother of an autistic child, fears the incentive to earn money will translate into cuts affecting care. And she says she saw that, but not in North Carolina. She tells the story of a private banker who warned potential new ABA investors not to cut the number of therapy supervisors too much to save money:

“He said ‘I know they’re expensive, but for every 40 or 50 extra kids you bring you have to have another one’ well, I almost fell out of my chair,” Unumb said. “You need a new one for every 10 or so. And so I was just, I was horrified.

Now Unumb is CEO of the Council on ABA Service Providers, which will launch an accreditation organization to set standards and help parents ask the right questions — like what staffing ratios they should expect and what training parents should expect. therapists should follow. These are questions that parents of newly diagnosed children forget to ask, as they are usually desperate to find care.