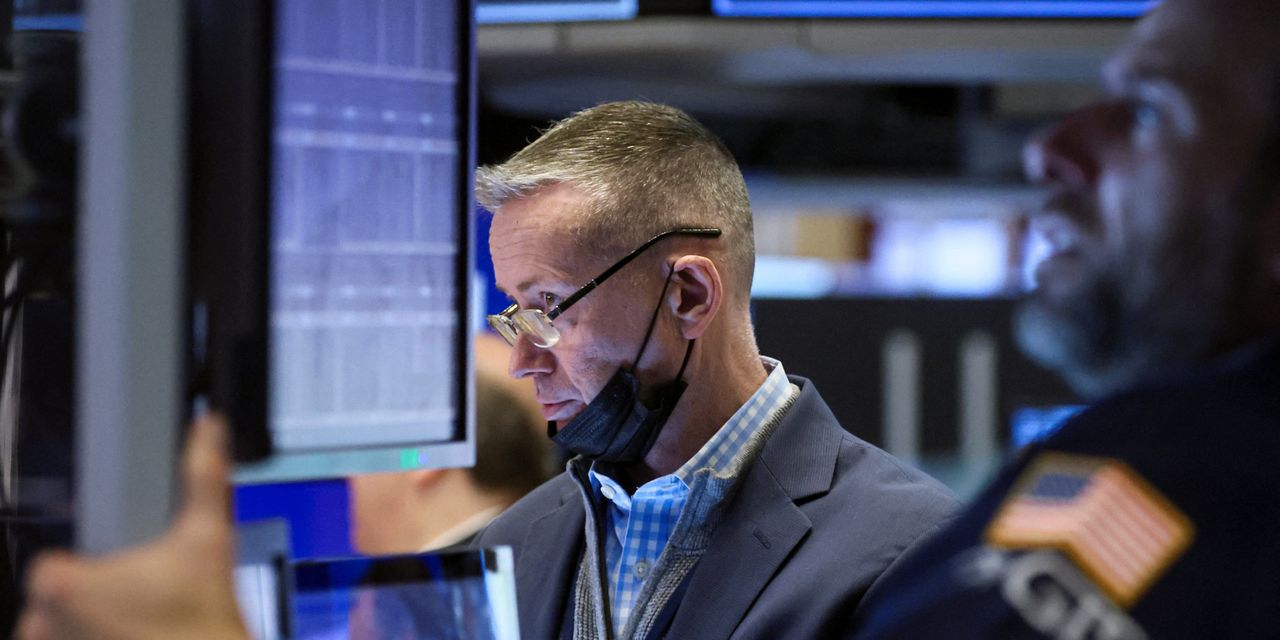 All three indexes had opened lower after Chinese stocks suffered their worst selloff in more than two years as Beijing sticks to its zero-Covid strategy while dealing with rising cases in major cities. Oil prices fell, at one point falling below $100 a barrel, before staging an afternoon rally.

A drop in bond yields signaled to investors that the Federal Reserve might not raise interest rates as aggressively as expected, investors said.

“Rates were weighing against the market,” said Jack Ablin, chief investment officer of Cresset Capital. “Now we are seeing a reversal of that trend.”

The yield on the benchmark 10-year Treasury note fell to 2.825% on Monday from 2.905% on Friday, as investors sought safer assets to hold. Yields and prices move in opposite directions.

“I think a lot of growth stocks have been punished too harshly,” said Brian Price, head of investment management for Commonwealth Financial Network. “Some of what we see may be a reversal of that. Longer term rates have just moved so far.

“The market is taking a step back and assessing whether it should have moved so fast. And lower interest rates tend to help growth stocks.

The Shanghai Composite and CSI 300 indices fell 5.1% and 4.9% respectively. These were the largest single-day percentage declines for both benchmarks since February 2020, when the pandemic began.

The offshore yuan fell around 1% to trade at around 6.59 to the dollar. It was the lowest since November 2020, according to FactSet. The decline built on a selloff last week that ended months of relative stability.

“The problem with inflation is that it can embed itself and we see inflation getting quite sticky,” said Sebastian Mackay, multi-asset fund manager at Invesco. “What we are seeing is a combination of the war in Ukraine and the lockdown in China causing supply issues.”

Limiting travel in China could also undermine demand for oil. Brent, the international oil benchmark, fell 4.1% to $102.32 a barrel. Oil prices remain near historically high levels on concerns about disruptions in energy markets due to Russia’s invasion of Ukraine.

In other corporate news, Coca-Cola shares rose 69 cents, or 1.1%, to $65.94. The company said it saw an increase in sales over the past quarter as demand held up amid rising prices. Advanced Micro Devices added $2.55, or 2.9%, to $90.69 after an analyst at Raymond James raised its rating on the chipmaker’s stock.

High inflation prompted the Federal Reserve to redouble its efforts to combat it. Last week, Fed Chairman Jerome Powell signaled that the central bank was ready to tighten monetary policy more quickly and indicated that it would likely raise interest rates by half a percentage point when of its May meeting.

Fund managers worry that the Fed’s aggressive interest rate hikes could slow economic growth or even tip the economy into recession. This could lead to a situation where the Fed needs to raise interest rates in the short term but cut them in the long term, Mackay said.

On Monday, the Cboe Volatility Index – Wall Street’s so-called fear gauge, also known as the VIX – approached its highest level since mid-March before falling back to 27.02.

Gold futures fell 2% to $1,893.20 per troy ounce. While gold has historically been seen as a hedge against inflation, it earns no return, making it less attractive than government bonds in times of rising interest rates. The cost of buying gold, which is denominated in dollars, is also more expensive for foreign investors when the dollar strengthens.

How the biggest companies work